I have been home for more than one week now trying to figure out what I possible could write about this symosium.

We all met up in Tallin where knitting were present everywhere.
Knitting market close to Viruporti. Amazing amounts of knitwear close to Viro Porti, Tallin. 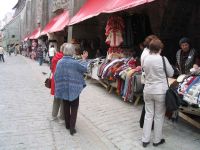 On the flight down to estonia I knitted on my clapotis and finally, on our trip to the schoolmuseum in Heimtali, I did it. I finnished the Clapotis.

The second day we went to Tartu, the second biggest city in Estonia. Here we enjoyed a tour of the musem and big amounts of knitted stuff. 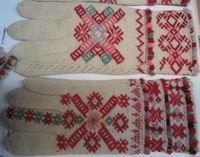 I tried to take a photo of the complete glove but had to be satified with this. The knitter has realy gone wild in colour, I like it.

Knitted lace at the National Museum in Tartu.

We also swarmed the city of Tartu looking for yarnshops and bookstores. Some where very lucky to find cheap yarn. I found myself in the position as translator with my very bad finnish knolledge(finnish and estonian are similar languages) and we actually found some nice yarns, cheap too.

The next two days we spent with workshops, trying to learn some Estonian techniques. 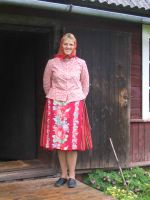 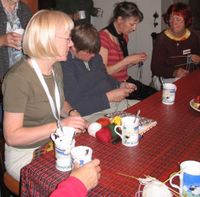 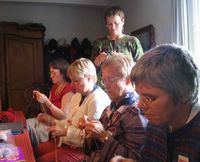 You have to consentrate. 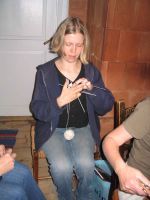 It is a bit complicated. 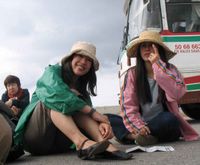 Waiting for the ferry to Kihnu. 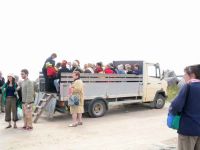 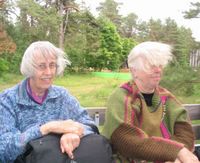 Turbulent ride to the Comunity house.

Me on the Kihnu taxi. 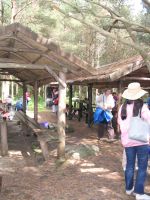 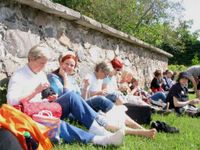 Knitting in sunshine while waiting for the guiding of the church. 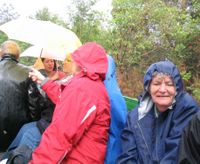 The rain poured down on our sighseeing of the iland. 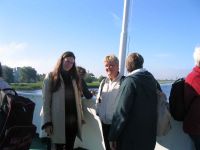 Arriving to Pärnu.
My maingoal whith my partisipation was to meet other yarnoholics, knitting freeks and make new friends. This was a big success in theese parts. I have never ever met so many nice people and made so many friends during one week as I did during my week in Estonia. I estimate that I have got about 30 good new friends. There has just not been time enough to make more friends. I could have made even more friends with more time I'm sure about that but you need time to talk and find eachothers spirit. So those of you whom I never got close to you I would like to say, I just had not time and energy to make more friends this time but I'm looking forward to learn to know you better next time.
I have also seen a lot of marvelous knitted objects and woven too. Estonia is rich in it's knitting traditions and are still having a living knitting tradition with long history. There are so many techniques and patterns in the knitted tradition and they are still visible today.
My main fear before going to Estonia was that the country was unstable and insecure but these fears were soon forgotten. I felt just as secure and safe as in my hometown.
Posted by Mitz at 10:01 2 comments: 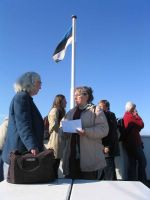 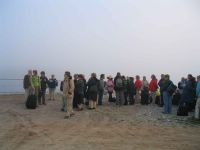 Waiting for the ferry early sunday morning.
Posted by Picasa
Posted by Mitz at 07:30 No comments:

Traditional shoe, shoestring and sock.
Posted by Picasa
Posted by Mitz at 07:29 No comments:

Border on a Kihnu glove.
Posted by Picasa
Posted by Mitz at 22:53 No comments:

Testing Nalle and Opal together.

I am still working on the A-shaped sweater. I like these colors better. Espesially the tourquise Opal mixed with the multicoloured Nalle. I only have 200gram of tourquise. I'll use the blue and lilac at the end. I am also thinking about doing this sweater in a feather and fan pattern. That way the sweater will look as waves, I think.

One thread each of Nalle and Opal on needles 5.5mm, 17x24stiches.

To much to say and too little time!

I have a draft about the knitting symposium in Estonia active but there is so much to say...

I just wanted all of you to know: summer issue of Knitty is finally here, :) , go there and enjoy!
Posted by Mitz at 07:38 No comments:

I do try to decrease the amount of yarn I have but not very successfully. There always seems to be more in than out no matter how much I try to knit.
This sample is thought to become my holiday sweater knitted from up and down in A-shape. I think all the time spent in the car to my parents and all other relatives could make this sweater ready already this summer. If only I am able to figure out how to knit.